Why do fitness device makers claim you need to take 10,000 steps every day? Do you also really need to drink eight glasses of water daily? The scientific basis for popular health claims is often thin. A piece in the New York Times, for example, notes that the idea of 10,000 steps was based more on marketing—it was the name of an early pedometer—than science. Data point to clear benefits from moderate exercise—perhaps 7,000 steps or so but not necessarily more.

Often popular wisdom turns out to be only sort of true. The emphasis on so many steps is one instance. Glasses of water is another. If you let yourself get too thirsty, you may be tempted to reach for sodas or sugary coffee drinks, and that’s not good. But a scientific review in 2002 found “no scientific studies” that support the eight-glass claim for healthy adults in a temperate climate. That doesn’t mean it’s wrong, but it does mean we probably shouldn’t worry if we drink only six.

It’s worthwhile to dig a bit into often heard health maxims before accepting them literally. You can sometimes find a nugget of truth that has become seriously exaggerated, or you discover that a claim stems from outdated and poorly applied evidence. The latter is what happened with a famous and specious claim about female fertility.

For decades women have heard distressing warnings about their “biological clocks.” We have been repeatedly told that fertility drops dramatically after age 30, so people who want children either need to get moving or else freeze their eggs. Embryo freezing is now a big business, and discussions of it are commonplace among young professional women. Pregnancy, and age-linked anxiety about it, also occurs among transgender and nonbinary people.

But, as Jean M. Twenge reported in 2013 in the Atlantic, the claim is based on very sparse data, much of them of dubious quality or relevance. The notion stems largely from a 2004 paper based on records from 1670 through 1830. Many things have changed since then, including medical care and nutrition. In wealthier nations, people are now healthier overall and likely to be more fertile for longer periods of their lives. Systematic data collected by the National Center for Health Statistics demonstrate that from 1980 to 2002 fertility rates for women aged 30 and older were going up. It is also worth noting that when infertility treatments started to become more common and more clinics began opening in the 1980s and 1990s, alarms over biological clocks were being sounded by this growing industry with a self-interest in the matter.

Despite the importance of childbearing to so many people—and although infertility treatments are costly, have only modest success rates and are not risk-free—the sad fact is that robust studies of age-dependent infertility are scant. The data we do have tend to show that although fertility does decline slightly at older ages, most women continue to be fertile well into their 30s, and for many people that is a good time to have children. There’s a long-standing cultural tendency to blame infertility on women, but when a couple is infertile it is equally likely that the cause can be traced to the man. Male infertility also declines with age, but how often do you hear warnings about the male biological clock?

Like the female clock or the 10,000 steps, many health beliefs have shallow and flimsy roots. But sometimes the wisdom of the crowd is supported by facts: most of us do need around eight hours of sleep a night, for instance. So where does this leave someone trying to make sense of what they hear or read?

Well, for one thing, people should be skeptical of any large claim based on one study. Good science requires building a multifaceted and detailed case, which takes time and is almost never achieved in a single piece of research. The online medical library PubMed.gov enables people to find out if a subject is well studied or not. And the National Institutes of Health has a medical consensus program that has published more than 160 statements on various diseases and their treatments. Some of them are actually readable, and none relies solely on data from more than a century ago.

Health is Wealth: The Write Stuff for the Body, the Community and the World

Mon Feb 21 , 2022
Photo by Karen Pearlman The Write Juice food truck owner Joshlyn Turner preparing items for customers at the Amazon Distribution Center in Otay Mesa. Born into a family that paid close attention to their health needs, Joshlyn Turner spends much of her adult life helping others take better care of […] 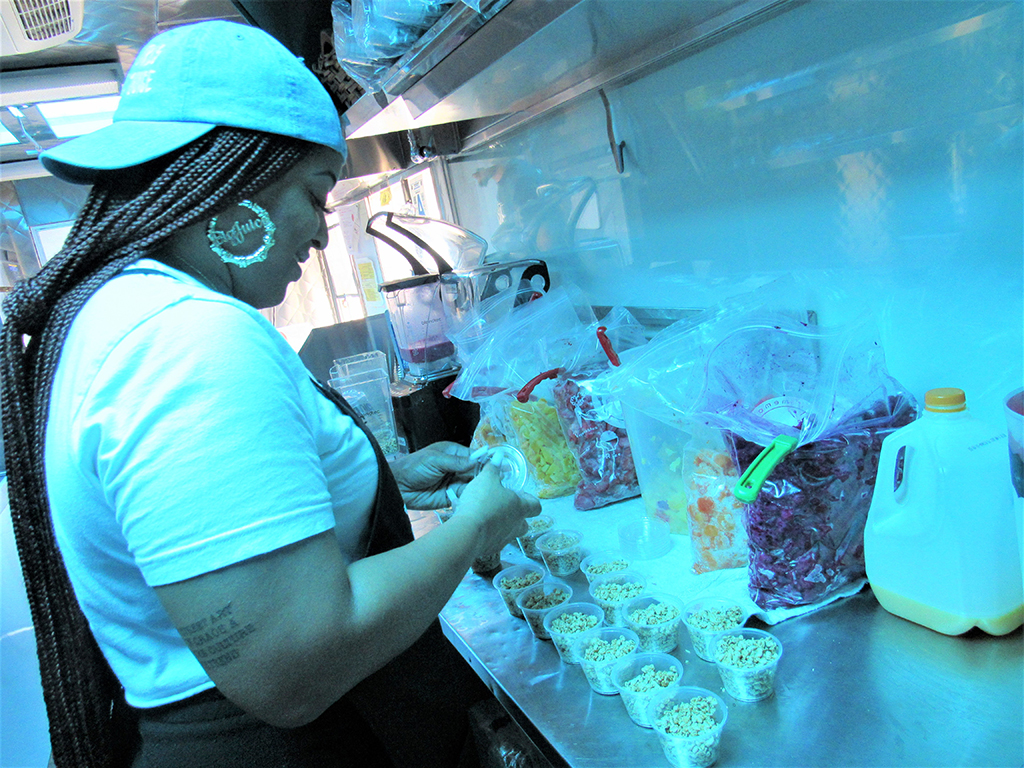