Watford defender Adrian Mariappa is one of the three Hornets staff to have tested positive for coronavirus but insists he has no idea how he caught it.

The 33-year-old was one of six positive results from the first round of Premier League testing this week as the top flight takes steps towards a resumption.

Mariappa told the Telegraph: “Ever since I got my positive result back on Tuesday, I’ve been scratching my head to try to work out how I might have got coronavirus.

“It was a big surprise because I haven’t really left the house, apart from some exercise and the odd walk with the kids. I’ve mainly just been homeschooling and keeping fit.

“The club doctor called to tell me and, to be honest, I did ask whether it could be 100 per cent accurate or whether my results could have got muddled up. Maybe if I had been displaying any symptoms then it might have made sense. But in my head it wasn’t adding up.

“I’ve not had any symptoms and I’ve felt as fit as ever, probably fitter because I’ve been working really hard. I’ve been following my training programme and I’ve not felt out of breath or ill, or anything.

ℹ️ Watford Football Club confirms that three people have tested positive for the Covid-19 virus following testing at the training ground over the past 48 hours.

“We’ve been fully monitored the whole time and the club have been able to track our distances and things.

“I’ve been really excelling in all of that. It’s quite scary how you can feel absolutely fine and not really have left the house, and yet still get the virus.

“If it wasn’t for the fact I had gone back to training and had this test, then I’d never have found out that I had the virus and I would just be getting on with things as normal. That’s obviously quite a strange thought.”

But the Jamaica international was disappointed the results have ended up revealing his identity.

“I’d have preferred if everything had been kept private,” said Mariappa.

“But once Watford’s name came out then my phone went mad with people asking who it was and I’m sure it was the same for all of the rest of the staff and players.

“For your family, you’d rather keep it to yourself, but, unfortunately, that hasn’t been possible. It’s disappointing that rumours started, but I will just get on with things now and follow the protocols.”

Watford captain Troy Deeney has already said he would not return to training to protect the health of his family, with the club posting pictures of some of the squad back at the training ground on Wednesday.

Back to work👍🏻 Tiny steps.. still very important to follow medical advice and play our part in helping the nation back on to its feet. The more we can all do the quicker we can hopefully get OT rocking again … 2m apart … wash your hands… let’s beat this thing #StaySafe pic.twitter.com/94BjVAdbuh

Harry Maguire was impressed with the safety measures as Manchester United returned to training.

The defender told his club’s website: “It seems such a safe environment. It’s our first day back, but it seems so safe and everyone is respecting it so well, so long may that continue and I’m sure no one will have any problems.

“There is a lot less people at the training ground when we go in. I was in a group of four, working with one coach, so not many people. You’ve got a lot space, big areas, not going really close to anyone, but the main thing is getting the work in and it was a tough session.

“I think every 30 minutes we have a different slot and each slot is taken by a different coach at the club.

“It’s obviously strange and something that we’re not used to, but at the moment it’s just getting the base fitness, the physical fitness and I think it’s good mentally as well to come into the training ground and get used to the surroundings again.”

Meanwhile, Sheffield United manager Chris Wilder has called the results of the coronavirus tests “encouraging” as players return to non-contact training this week.

Speaking on Sky Sports, Wilder said: “A lot of people have been tested and the signs are encouraging.

“Testing has been very thorough. A lot of hard work has gone into to make sure this runs as smoothly as possible.

“It is baby steps in the process of returning to full training.”

The Premier League is continuing to target a return to action next month. Although there is a limited window for training to get up to full speed, Wilder said players were not starting from scratch as they would in a regular pre-season.

“When we paused the season, these players have an obligation to their profession to keep themselves right so straight away, the programmes they were given, they weren’t off to Dubai or Vegas eating and drinking whatever they want,” Wilder said.

“They’ve got a professionalism about them and my players are in absolutely brilliant condition.

“We’ve tested them right the way through. They’ve got individual programmes. They didn’t know when this was going to kick-start and they had to be ready.”

The Bundesliga and 2. Bundesliga will also hold a minute of silence in their next two matchdays to remember the victims of coronavirus and also support those fighting the battle against it.

The divisions returned over the weekend after being halted in March.

California is reopening, but anxious customers are slow to come back

Fri May 29 , 2020
A deserted restaurant in the Napa County city of Yountville. Some restaurants have begun welcoming back dine-in customers. (Rich Pedroncelli / Associated Press) From restaurants to shopping malls, the California economy is grinding back to life after months of coronavirus closures. But one question looms over the reopening cheers: Do […] 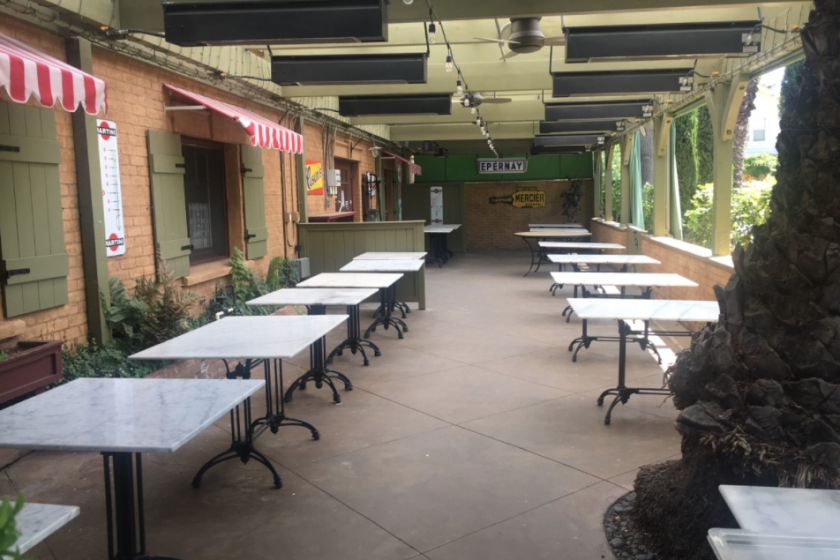