Niacinamide is a precursor to NAD+ (nicotinamide adenine dinucleotide), (a vital signaling molecule that’s believed to play an important role in longevity. In fact, the best single NAD+ precursor is niacinamide, and this is reason alone to educate yourself about its benefits, but niacinamide, also known as nicotinamide (NAM), is also valuable in its own right.

Supplementation with NAM has been found to improve insulin sensitivity in models of human diabetes, for instance, and it also decreases oxidative stress and prevents fatty liver.1 It also shows impressive promise for fighting obesity and associated diseases, including stroke, cardiovascular diseases, diabetes and certain cancers, which have reached epidemic levels worldwide.2

But the key with NAM is that you need the right “Goldilocks” dose. The most common mistake people make is taking too much and thereby actually sabotaging any metabolic benefits.

NAD+ modulates energy production and many enzymes and in so doing controls hundreds of processes in your body, including the survival of cells and energy metabolism. NAD+ is influenced on a daily basis by what you eat, exercise levels and more, and also declines with age, leading to changes in metabolism and an increased risk of disease.3

Boosting NAD+ levels may be akin to a fountain of youth, which is where niacinamide — as an NAD+ precursor — comes in. More than 2 billion people worldwide are overweight, 35% of whom are severely obese.4 NAD+ has notable roles in obesity, with higher levels linked to decreases in fat tissue in obese rodents and humans.5

In the study, NAM also activated the rate limiting enzyme for NAD+ NAMPT (nicotinamide phosphoribosyltransferase). Nichola Conlon, Ph.D., a molecular biologist, antiaging specialist and founder of a nutraceutical company that produces an NAD+ boosting supplement, explained in our past interview:8

“The reason the salvage pathway declines with age is because of this one key enzyme. NAMPT actually recycles niacinamide and converts it into NMN [nicotinamide mononucleotide], which then gets converted back into NAD. The rate limiting step, the bottleneck in that process, is NAMPT. And lo and behold, that is the key enzyme that declines as we get older.

Studies have demonstrated that you get a 50% decrease in this enzyme between the ages of 45 and 60. That’s a significant decline considering how important this is for new NAD production. The decline in the levels of this enzyme again correlate with the decline in NAD that we experience.

Many diseases and issues that are associated with NAD decline are found to be because of a reduction in this enzyme. So, it’s absolutely critical to try and improve the activation and expression of this enzyme in the body to enhance NAD. It worked brilliantly to give us high NAD levels when we were younger, so why not restore it back to that?”

Interestingly, this recent study on obese mice confirmed the dose that I recommended when I first posted it three months ago. They found the NAM supplementation increased cellular NAD+ level by 30% — and this was without the additional interventions I advised, such as exercise and time-restricted eating. The researchers noted:9

In summary, the study revealed impressive benefits yielded by NAM supplementation at a low dose of 2.5 milligrams (mg) per kilogram of body weight daily for three weeks10 which is about 170 mg for a 150-pound person. I had recommended 50 mg three times a day. In addition to increases in NAD+ they noted:11

Niacinamide Is the Best NAD+ Precursor

In my research for my landmark book, “EMF’D,” I read dozens, if not hundreds, of papers on NAD+ and now realize it is likely because of financial interests that the best precursor — niacinamide — is not recommended more frequently.

The immediate breakdown product of NAD+ is niacinamide and the enzyme NAMPT is the rate limiting enzyme in the salvage pathway to restore niacinamide back to NAD+. As you can see by the pathway below, niacinamide is first converted to NMN before NAD+. This is likely why researchers like David Sinclair with Harvard Medical School and others promote NMN.

However, the enzyme NMNAT1-3 that converts NMN to NAD+ is not the rate limiting enzyme. Recall that NAMPT is what controls how much NAD+ you make. So, flooding your body with NMN is not going to be as useful as using small amounts of niacinamide and activating NAMPT. Ideal dosing of niacinamide is from 25 to 50 mg three times a day. It is the rare person who will not respond favorably to this simple intervention for increasing NAD+. 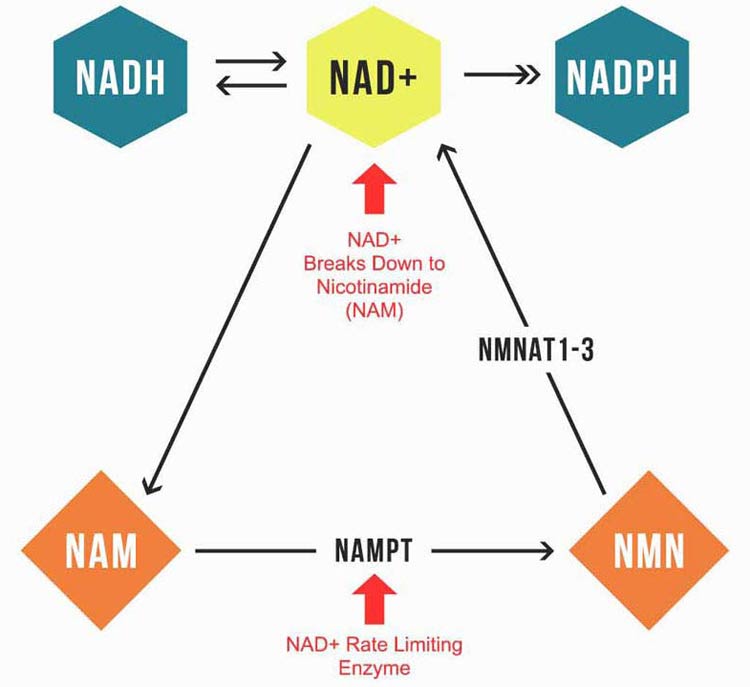 Why You Haven’t Heard of Niacinamide

When it comes to NAD+ precursors, there’s a good chance you haven’t heard about niacinamide, despite its powerful benefits, and this is because it costs much less than other NAD+ precursors, such as nicotinamide riboside (NR).

No one is promoting niacinamide because it costs less than one cent a day and as a result there is simply no money to be made in promoting it. Ideally you buy niacinamide powder and use 1 to one-half of one-sixty-fourth of a teaspoon three times a day (25 to 50 mg).

If you would like a more precise dose you could use the dose in the study of 2.5 mg/kg or 1.13 mg/pound of body weight in three divided daily doses. If you are a 150-pound person this would be about 50 to 60 mg three times a day.

You will need special measuring spoons to measure this small a dose. This is important, as more is most definitely not better. If you use too much you will actually inhibit sirtuins, which are important longevity proteins.

Spending $11 on 250 grams of niacinamide powder will give you a nearly four-year supply. That pencils out to 23 cents a month — or less than one penny a day. It is basically free. NMN in therapeutic doses of 1 to 2 grams per day can be $100 to $200 a month, or 400 to 800 times more expensive than niacinamide powder.

Why Boosting NAD+ Levels Is Important

As mentioned, the reason why the research into niacinamide is so exciting is because it appears to efficiently and safely boost NAD+, which otherwise declines with age. In animal studies, restoring NAD+ levels in older or diseased individuals promoted better health and extended lifespan, which suggests NAD-boosting molecules have the potential to increase resilience, reduce disease and extend healthy lifespan in humans as well.13

Research into NAD+ is still in its infancy, but James Clement, author of “The Switch: Ignite Your Metabolism With Intermittent Fasting, Protein Cycling, and Keto,” conducted his own research, starting with a clinical trial testing intravenous NAD+ in elderly people, in collaboration with Dr. John Sturges.

Clement underwent the treatment himself, which involved an infusion of 1,000 mg of NAD+ per day for six straight days, and found it remarkably effective for tremors he’d had since he was 20 years old. While he believes 1,000 mg may be too much for those who don’t have a severe NAD+ depletion — and is also cost prohibitive, at $1,000 per IV — he noted that many lifestyle factors can reduce your levels, including alcohol consumption.

Aging is another factor and, according to Clement, NAD+ may be depleted by 50% by the time you’re 60 (compared to in your 20s or 30s), and when you’re 70 you may only have 10% of the amount you did when you were younger.

“And then at 80, there’s almost none,” he said, adding that this will seriously impair your body’s ability to repair broken DNA. “You can see how this huge build-up of damaged DNA in every cell of your body is potentially one of the driving forces of these morbidities that you see with aging, heart disease, cancer [and] Alzheimer’s …”

Natural Ways to Raise Your NAD+

Niacinamide supplementation can be beneficial, but for best results it should be done in conjunction with a healthy lifestyle. There are many natural strategies you can take to boost and maintain youthful NAD+ levels, including:14

It’s difficult and complicated to test NAD+ levels in a lab, and Conlon is skeptical that most companies that advertise NAD+ testing are getting accurate results. So how can you know if the strategies you’re using are actually increasing your levels? Pay attention to the following three items, which nearly always improve as NAD+ levels increase, according to Conlon:15