A Yuba City hair salon is disinfecting the soles of clients’ shoes before allowing them inside.

A gym across town has tripled its cleaning staff, but isn’t requiring its members to wear masks.

An antique store in nearby Marysville is celebrating a kind of grand reopening with balloons and signs, hoping to entice wary customers.

In Yuba and Sutter counties, Monday was the first real day back to normal in weeks — almost.

The argument? Yuba County and Sutter County combined had only 50 virus cases and three deaths as of Sunday. Its infection and death rates are considerably lower than the state’s overall rate. Combined with good public health practices such as physical distancing, their local economies should be able to reopen without causing a spike in coronavirus cases, health officials said.

Cities and counties across the state have demanded Newsom give local leaders more agency over when and how they reopen, particularly those where relatively few residents have been infected or killed compared to major metro areas such as Los Angeles and the Bay Area that have become hotspots for the virus.

Assemblyman James Gallagher, R-Yuba City, a Newsom critic, said it’s about time Newsom listens to what North State counties “have been saying for the past few weeks.”

“In the North State, our communities have met the scientific criteria for re-opening and we’re not going to wait for San Francisco and Los Angeles in order to reopen,” Gallagher said. “If this is truly about science and not politics, the governor shouldn’t push back against local public health officers who are moving forward with their phased re-opening plans.”

On Monday, Newsom appeared ready to be flexible. After days of calling on local governments to hold the line, he appeared to turn the pair of rebel counties into front-line leaders, when he announced a new statewide move to gradually restart the economy beginning Friday, riding on low and steady infections, hospitalizations and deaths in California.

As residents enjoyed the breezy sunny day on patios and at coffee shops, the region may offer a glimpse at what the next few weeks and months will look like in California cities big and small, urban and rural.

Saying the state is at a “hinge moment in this pandemic,” Newsom said he will announce details on Thursday to begin reopening parts of the state economy on Friday, and will include a process for allowing some counties where the infection rates are low to move more swiftly than the rest of the state.

Asked at his press conference about Yuba-Sutter, Newsom complimented the health officer’s approach and sounded conciliatory, saying that, in terms of where the state and the locals standing on reopening, “We are all within the margin of error of each other.”

“Again, I recognize their desire, their frustration and I hope they recognize the consequential nature of today’s announcement,” Newsom said.

The state will loosen restrictions Friday on retail outlets to sell goods curbside, but restaurants aren’t expected to allow customers to dine-in by the end of this week, said Dr. Sonia Angell, the director of the California Department of Public Health.

That puts Yuba and Sutter counties, along with Modoc County, which also reopened Monday, in murky waters.

It was a decision meant to “continue to mitigate the spread of the virus to the greatest extent possible while addressing the need to gradually reopen the economy,” Luu said in a statement.

Dr. Luu is looking at the “totality of the health” of the entire community, said Sutter County spokesman Chuck Smith.

“She is recognizing people without an income and poverty, that has a direct impact on people’s health,” Smith said.

“We have zero hospitalizations,” he continued. “One county resident is in a Sacramento County hospital and looking good. We got to the point where, our case transmission is one-fourth of the California (average.) We have had the same amount of testing per capita.”

Ron Sullenger, chair of the Sutter Board of Supervisors, said he is pleased the governor is showing more understanding of his county’s situation, but said Sutter was determined to do what it felt was right regardless of the governor’s stance.

“I think Governor Newsom has probably never been exposed to rural life. I’m not sure he completely understands,” Sullenger said. “As we look at it, Dr. Luu has given us a plan. Rather than see the local economy collapse, we felt it was time we say to the governor, ‘We appreciate your approval on something we plan on going ahead with.’ We are small potatoes. I don’t think he has any reason to pick a beef with us.

“We want to move forward safely, of course. We are going to do what is safe economically and medically.”

Yuba and Sutter counties feel prepared. River Valley and Yuba City high school gyms have been approved as sites for surge hospitals. A new testing site in Yuba City opened this week that can handle 130 people a day.

Notably, the joint two-county easing of the order, in effect as of Monday, still calls for public caution, social distancing and, when distancing is not possible, it calls for people to wear face masks in public.

Social gatherings are limited to 10 people or fewer. People age 65 and older or those with medical conditions must remain home, the counties said.

Bars are still closed in the counties, as well as other high-traffic establishments such as movie theaters, schools, churches and bowling alleys.

The move from Yuba-Sutter comes as local elected officials across the Sacramento region have described Newsom’s indefinite statewide stay-at-home order as a one-size-fits-all plan that doesn’t take into account different coronavirus case rates or geography.

More than half of the state’s death toll so far has come from Los Angeles County, where more than 1,200 have died and more than 25,000 cases have been reported, according to the county’s public health department.

Municipalities in the Sacramento region, including the cities of Placerville, Roseville and Folsom, have written Newsom demanding they be allowed to “control their own destinies,” as a letter signed last week by Folsom Mayor Sarah Aquino and city manager Elaine Andersen phrased it.

Calls for Newsom to ease the restrictions have also come from public demonstrators.

Roughly 1,000 people gathered near the west steps of the Capitol last Friday to protest the stay-at-home order, a rally that lasted about four hours and ended with California Highway Patrol officers arresting at least 32 people after issuing an order to disperse.

Yuba City Mayor Shon Harris went to breakfast at a local restaurant and chatted in person with constituents on local issues. He was pleased to see that the tables were marked available or not available, people were social distancing and employees wore masks.

“This is a slow and steady opening,” he said, “not a wide opening. As long as we are smart and everybody complies with it, it will be good. I think we have found that reasonable balance. I think we made a good decision.”

When Alexey Popov opened up his gym at 4 a.m. Monday, “we already had 30 people right away in the doors,” he said. To avoid the spread of the virus, the Future Fitness co-owner said they’ve tripled the cleaning staff and have cut the number of people allowed in the gym by half, about 25 members at a time.

“I’ve just been eating inside, it’s good to get out,” said Sahil Ralh, a member who just finished two-hour workout at the Yuba City gym. “I know not to touch my face and keep away from people. I have hand sanitizer on me to wash my hands. Everyone stays pretty far away inside.”

In Marysville, the Silver Dollar Saloon saw a 70 percent decline in sales during the stay-at-home order, said owner Joseph Ferrie. He had to lay off every employee except himself and his wife. With the county allowing businesses like his to reopen, he’s been able to rehire his staff, and hopes to start seating people in the dining room at half-capacity.

“We’re not trying to make a statement or anything, we’re trying to make a living,” Ferrie said. “This is a small town. If we don’t get back up and get going again, the economic impacts that’s going to happen in this area is not something we could recover from.”

Siting on the patio outside Brick Coffeehouse Café in Marysville, Kristin Docker sipped iced coffee with her friends and 7-month-old. She said she feels conflicted — she recognizes the virus is still spreading, but she’s tired of being cooped up at home.

“I will say I think it’s premature that our county has decided to reopen,” said Kristin Docker.

“But I like that I can sit and drink coffee not in my house,” her friend Marissa Miller replied.

Some businesses in Yuba and Sutter counties are now the only ones providing services for miles in Northern California.

That prompted Ricky Ramirez and his husband to drive up from Sacramento to Rockabetty’s Hair Parlor in Yuba City, in dire need of haircuts. “I tried last week to do my hair cut and I was like, ‘Oh my god, what am I doing,’” he said.

Amy Johnson, the owner to the hair salon, has started requiring clients to answer a series of questions to confirm they don’t have COVID-19 symptoms before entering the building. Customers also have to get their shoes sprayed with disinfectant, and their hands sanitized. The floor is covered with tape guiding clients to chairs six feet apart.

“I love my hair cut,” Ramirez said, wearing a surgical mask. He laughed. “The only thing I don’t like: they sanitize you like a chicken.”

Johnson, speaking behind a red polka dot mask, said she’s happy to accommodate the precautions if it means her store can stay open. “I haven’t had a great ‘corona-cation.’ I’ve had to organize what bills I can pay, what bills I can’t pay.”

Down the street at Lambert House Cafe, Bernie and Daniel Johnson sat on the patio tucking into biscuits and gravy and potatoes, happy to return to their Monday breakfast ritual with their dogs Umi and Anastasia. “When we came up they were so excited to get out of the car, they started giving happy feet and howling,” Daniel Johnson said.

“I think people are smarter than people give us credit for,” Bernie Johnson said, a purple bandanna tucked under her chin. “People are tired of being cooped up.”

Tue May 5 , 2020
FREDERICKSBURG, VA — Fredericksburg officials are developing a plan to reopen the city government in response to Virginia Gov. Ralph Northam’s announcement on Monday that the state will ease some restrictions on businesses and gatherings starting May 15. In the meantime, the city will continue to conduct most government services […] 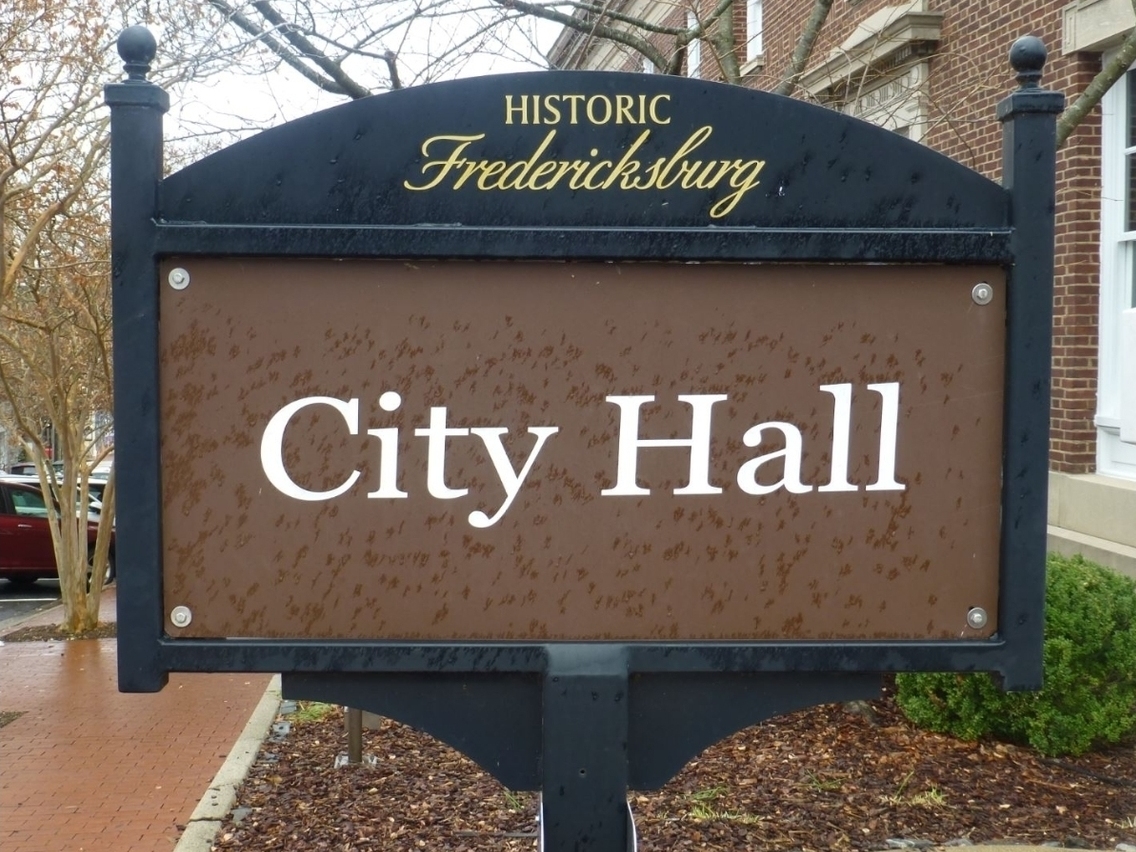