The Federal Government has been slammed for ignoring the country’s most deadly cancer after failing to fund a lung screening program in the Federal Budget.

The decision to ignore pleas for the funding could cost 12,000 Australians their lives over the next ten years, according to the Lung Foundation.

And it is just another blow for cancer sufferers like Lana Mackenna who were hoping they could share their own stories to raise awareness for the importance of early detection of the disease.

The 33-year-old told FEMAIL she was disappointed but not surprised by the government’s decision not to fund the program.

‘I feel like it is a budget appealing to the Liberal base, focusing on the is issues of right now without any long term planning of what Australian actually need,’ she said. 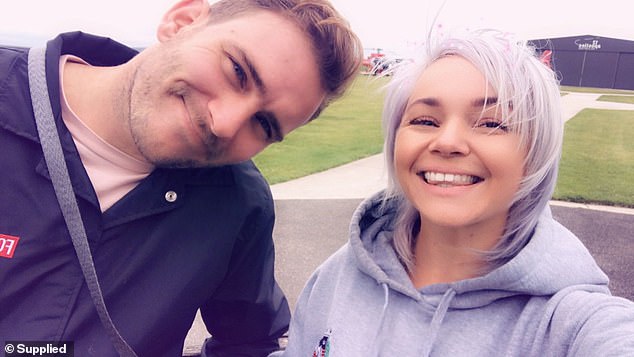 ‘Like better wages, secure work, better childcare and an address on climate change. Or tackling the biggest cancer killer.’

Lana, who has previously admitted she never imagined being on a cancer journey in her 30s, wants funding for lung cancer nurses, the screening program, cancer support for remote communities and funding for research into the disease.

The sentiment is echoed by the doctors at Lung Foundation Australia and their Chief Executive Officer Mark Brooke who have been working hard to highlight the importance of a screening program.

The foundation noted a lot of work had gone into assessing suitability of a lung cancer screening program, which was ultimately recommended by Cancer Australia only for it to be ‘blatantly ignored’ by Scott Morrison’s government.

Last year’s budget allocated $6.9million to the project which makes the new allocated amount of $0 even harder to bear. 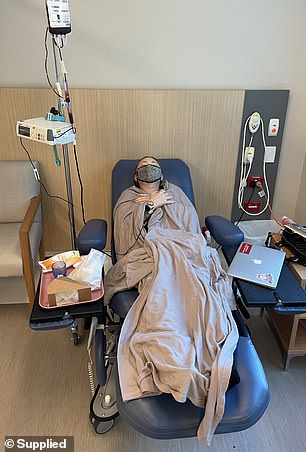 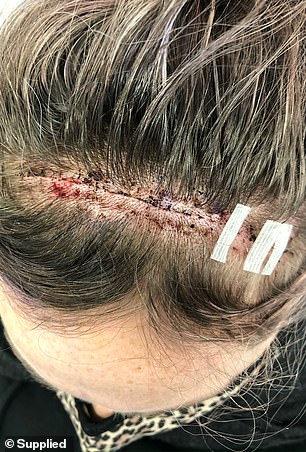 The young woman thought her thirties would be the best years of her life – she didn’t imagine she would be fighting cancer (right, after an operation on her brain to remove a tumour

‘There is undeniable evidence for this screening program that has already had initial investment into scoping, but this lack of funding means progress will stall, and thousands of lives will be lost as a result,’ he said.

‘(There is a ) deep disappointment that the government has stalled progress by not funding a national lung cancer screening program, again reiterating the stark inequity in funding between lung cancer and other leading cancers,’ he added.

Lana initially shared her story in the hope that funding for early screening could help others.

When she visualised her thirties she imagined they would be the best years of her life.

What she didn’t expect was a terminal lung cancer diagnosis, a ‘fried and foggy’ brain from the treatment and a collapsed lung.

But for the 33-year-old from the Gold Coast, this has been her reality for three years despite leading a healthy lifestyle and never touching a cigarette. 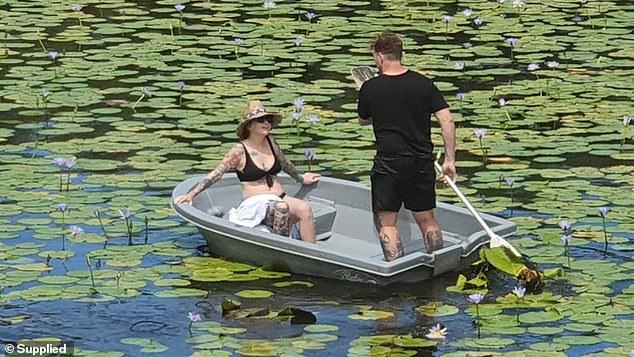 Lana was diagnosed with stage four lung cancer at 30, a disease which made her infertile following harsh treatments and stole her independence including the ability to drive.

Do you think the government should have budgeted for the lung cancer early screening program?

Lana spoke to FEMAIL about how she went from being a fit, healthy young woman filled with excitement about life to trying to stay positive and survive for as long as possible despite a terrible five-year forecast.

‘I had the best 18 months of my life before I was diagnosed with cancer. I had been exploring Melbourne, falling in love and I was looking forward to being taken seriously as a woman,’ she said.

Now she has epilepsy, crippling brain fog, seizures and will likely be on chemotherapy for the rest of her life.

And it all started with bad back pain that ‘wouldn’t go away’.

‘I tried everything, I went to the doctor who told me to take painkillers, I went to physios, osteopaths, chiropractors and even tried acupuncture,’ she said.

‘But nothing fixed it.’

Her GP told her to ‘practice mindfulness’ to help with the pain explaining it was ‘probably just stress related’. 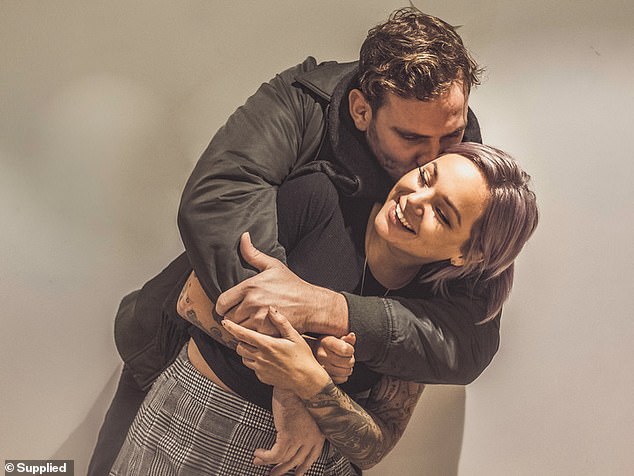 Lana, pictured with her husband Mitch, says she experienced symptoms six months before she was diagnosed including persistent back pain

Lana knew something was wrong but didn’t know where else to turn after exhausting every medical avenue she could think of and being turned away by her GP.

‘He told me there was no need to do an X-ray, he didn’t want to put me through that much radiation, which is funny because now my brain’s been fried by it,’ she said.

No stranger to cancer, the then 30-year-old was part-way through getting her breasts removed after finding she carried the BRCA 2 breast cancer gene.

‘I had been proactive about cancer, the gene was in my family so I was tested and said straight away let’s do this,’ she said.

When she wasn’t healing from her breast surgery doctors became concerned and drained her lymphatic system.

When Lana stated getting short of breath, doctors drained 800ml of liquid from her lungs which caused one to collapse. 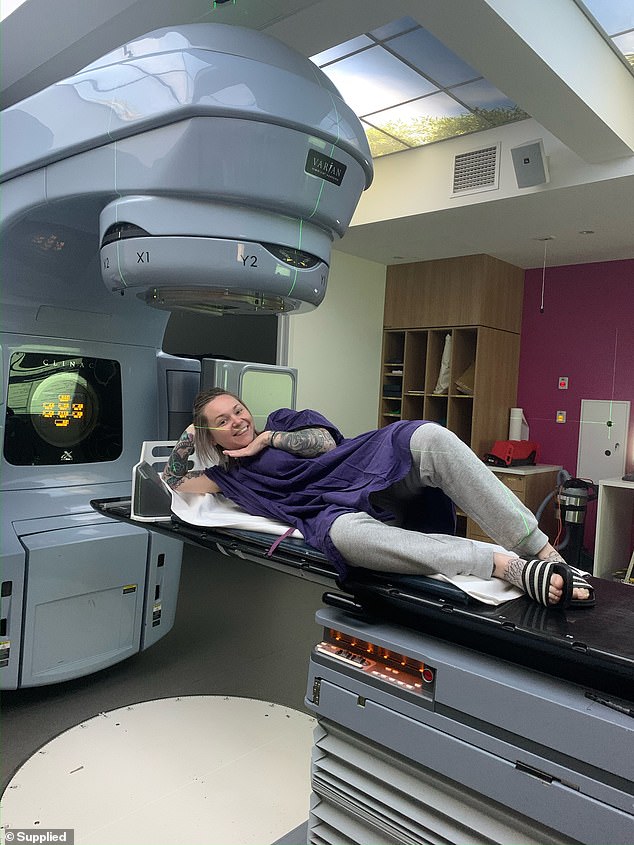 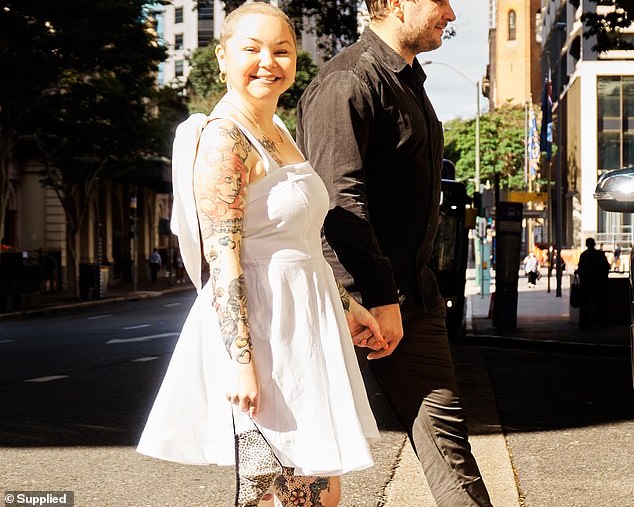 The medical error ended up exposing her lung cancer which was the cause of her sore back, inflammation and inability to heal as quickly as she should.

‘Before the doctors worked out it was cancer they had told me not to worry because it definitely wouldn’t be cancer,’ she said.

What should I look out for?

2 – Coughing, especially if there is blood

4 – A family history of the disease

‘When the nurse came into tell me I cried, I didn’t expect her to tell me it was cancer but I was scared and I knew whatever it was would change my life forever.’

The diagnosis came six months after Lana first noticed symptoms, leaving her frustrated that it wasn’t picked up earlier.

Lana said her partner, Mitch, has been a critical part of her journey. She never thought she would have children, get married or get swept off her feet by love, especially not with a man she met on Tinder.

‘The moment we started hanging out I knew, and a few weeks before I was diagnosed with cancer we agreed we both could see ourselves with kids,’ she said.

‘Everything was exciting and wonderful with him. We saw a life we had never believed in when we were together.’

With Mitch’s support Lana jumped straight into chemotherapy, radiation therapy and surgery, attacking the disease from every angle.

‘I told myself I didn’t care what my prognosis was, that I would get through this and live as authentically as possible at the same time,’ she said.

‘We struggled through the realisation we couldn’t have kids but have a ragdoll cat now instead. It is hard to put all of this on someone you love so much but he says he will always stand by me.

‘I am three years into this journey and I hope I have many more to come.’

Despite Lana’s positive mindset, the journey hasn’t been smooth with the first round of treatments leaving her tired and emotional. However it appeared to clear the cancer ‘from the neck down’. 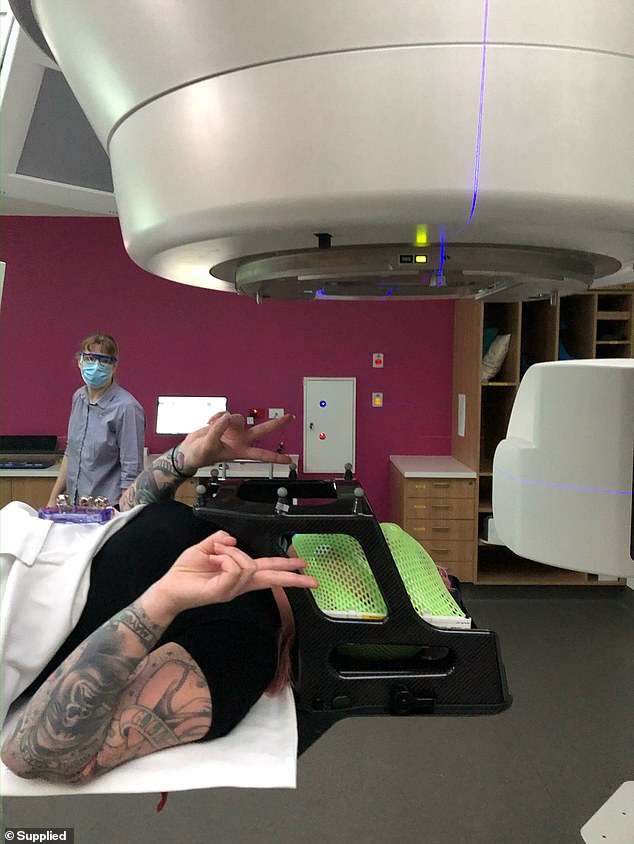 From May 2021 Lana didn’t have any visible signs of cancer showing up on scans but by July everything changed.

‘I started getting really bad headaches every day, I was anxious which isn’t me at all and I had furious mood swings,’ she said.

‘My oncologist thought it could just be a delayed emotional response from everything I had been through, and told me not to worry.’

But the cancer specialist ordered a CT scan ‘to be sure’, and it revealed spots forming on Lana’s brain.

The spots were secondary cancers from the original growth in Lana’s lungs.

‘They also found a huge tumour in the front left of my brain,’ she said.

Doctor cut the growth out just before Victoria, where she was living at the time, went into lockdown. 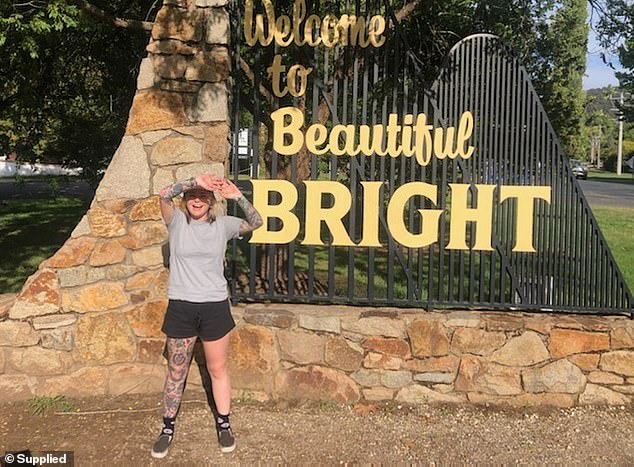 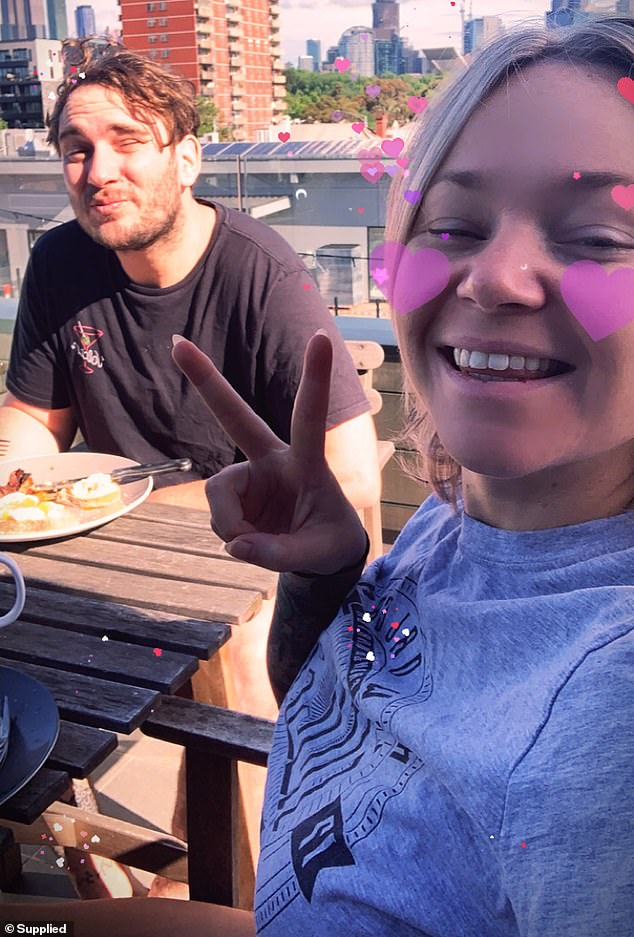 ‘I woke up and the nurses told me we were in lockdown and that I had 25 staples in my head,’ she said.

‘It was a wild time, my mum and sister came down and did hotel quarantine just to be with me.

At the end of 2021, Lana and Mitch moved to Queensland to be closer to her family.

‘They grow faster than the checkups come around,’ she said. 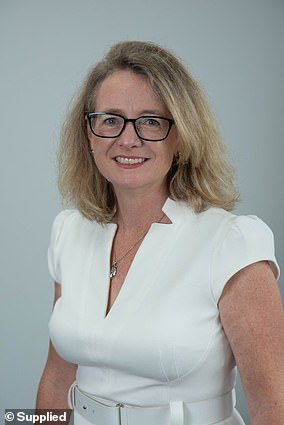 The professor said lung cancer is Australia’s deadliest cancer with less than 20 per cent of people diagnosed with the disease making it past the five-year mark.

‘That is of all cases, from early stage to late stage,’ she said.

‘If you only look at the early stage cases then it is higher but 80percent of lung cancer is found in the later stages.

‘That’s why I am so passionate about developing a screening program so we can find the disease in its early stages.’

Smoking used to be considered the main cause of the disease but researchers have found it isn’t the only cause, it can be environmental or hereditary.

‘The main risk factor to lung cancer is now considered to be having lungs,’ the professor said.

The clinician compared the disease to breast cancer – which can be checked for at home and with screening programs.

‘We can get to know our own breasts but we can’t feel for lumps in out lungs,’ she said.

‘Something as simple as a chest X-ray or CT scan could pick up abnormalities.’

Lung cancer can happen to anyone of any age, according to the doctor.

She believes a screening program would identify thousands of Australians who are living with early stages of the disease.

‘If we find it early, when it is tiny, we can just cut it out and treat it,’ she said.

She also addressed the issue with misdiagnosis and said it is important for people to go with their gut when they are feeling off.

‘It is so frustrating when people come to us and tell us they went to doctors months or years before and felt like their worries had been dismissed.

‘It adds an awfulness to an already difficult diagnosis – so I want to tell people to follow that instinct and ask their doctor to check again.’

She explained many of the symptoms look similar to those that could be explained by menstrual cycles, pregnancy and stress related to having a family.

But the professor insists people with persistent symptoms should continue to go to their GP until they get answers.

‘Go back to the same doctor and tell them you want more tests that things haven’t gotten any better.

‘We have excellent GPs in this country, they are well meaning and well trained and should look into it further.

‘If you go to a new doctor they might just come to the same initial conclusion and not look further.’

Doctors used radiation therapy on her entire brain including the healthy sections to put a stop to the cancer.

After the treatment, Lana and Mitch decided to elope in case further tests revealed she would need expensive, experimental treatments.

‘That would mean we would have to pay for that instead of a wedding, so we just got married and it was perfect.’ 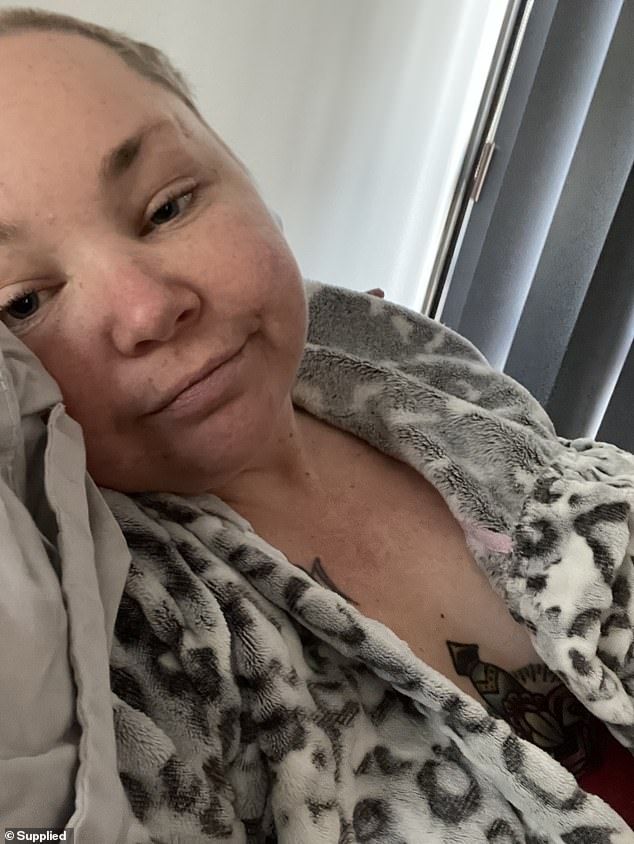 Lana says treatment is difficult, with every round of chemotherapy knocking her flat for a few days before she can recover and have ‘two good weeks’

She then went through seven rounds of chemotherapy until her scans finally showed the cancer was stable.

‘That’s when we go on adventures or I hit the gym and do the stuff I love to do.’

Lana is telling her story as part of an initiative by the Lung Foundation Australia to raise awareness about the disease and push for a national screening program to prevent scenarios like her own.