The University of Southern Denmark (SDU), Rigshospitalet and the University of Copenhagen have come together to study the effects of Football Fitness on various health parameters and self-rated health following treatment for breast cancer.

The results of the project, called Football Fitness After Breast Cancer (ABC), have now been published in three scientific articles published in international sports medicine, cardiology and oncology journals.

“The main conclusion is that Football Fitness is an intense and good form of training for women treated for breast cancer, with beneficial effects on balance, muscle strength and bone density,” says Professor Peter Krustrup, Head of Research at SDU’s Department of Sports Science and Clinical Biomechanics, who has been studying the health effects of football and other sports for more than 15 years.

The researchers from SDU and the University Hospitals Centre for Health Research at Rigshospitalet joined with doctors and nurses from the Department of Oncology at Rigshospitalet and researchers at the University of Copenhagen to investigate whether Football Fitness offered twice weekly for 12 months can boost various health parameters in women treated for breast cancer.

The study involved 68 women aged 23 to 74, with an average age of 48, who were randomized 2:1 to a training group (46 participants) and a control group (22 participants). The trial ran for 12 months, during which the training group was offered Football Fitness training sessions twice a week comprising a warm-up, fitness and football drills, and small-sided games of 5v5 and 7v7 using two goals.

At the start of the study and after 6 and 12 months, respectively, health parameters such as fitness, bone and muscle strength, balance, body fat percentage, blood pressure and cholesterol were measured and the participants completed questionnaires to rate their quality of life and energy in everyday activities.

It was also investigated whether participation in Football Fitness increased the risk of the participants developing chronic swelling (lymphoedema) on the side where they had been treated for breast cancer.

In an article just published in the Scandinavian Journal of Medicine and Science in Sports, the researchers show that 12 months of football training, performed on average 0.8 x 1 hour per week, gave the women better balance and greater muscle strength in the legs, while at the same time increasing bone density in the lumbar spine.

The participants who took part in at least one weekly session also achieved an improvement in bone strength in the femur.

“It’s encouraging that even a modest amount of training can produce these improvements because we know that treatment for breast cancer can accelerate the natural age-related loss of bone mass and thereby increase the risk of osteoporosis,” says Jacob Uth, assistant professor and Ph.D. at University College Copenhagen, who has been the project leader in the study.

“The fact that balance and muscle strength are improved at the same time is a big plus, because in the longer term this can reduce the risk of falls and broken bones,” he says.

In another recently published article in US journal Progress in Cardiovascular Diseases, the researchers show that the intensity is high, corresponding to a heart rate of more than 80% of maximum heart rate for 70% of the time the participants are playing with two goals. But this did not improve the participants’ fitness compared with the participants in the control group over the 12 months of the intervention.

On the other hand, the study showed that, after 6 months of Football Fitness training, the participants reported that health-related problems were less of a barrier to participating in and accomplishing everyday activities.

“While just one weekly training session on average was enough to produce positive effects on muscles and bones, and also to give a reduction in self-rated problems with everyday activities, it was not enough to produce a significant improvement in aerobic fitness for the football group. Our previous studies show a good improvement in maximal oxygen uptake of average 11% for 3-6 months’ football training comprising 2-3 weekly sessions, but the attendance in this study was obviously lower,” says Peter Krustrup.

“However, we were able to establish that the intensity of the football training was just as high as for other target groups with hypertension and type 2 diabetes and also that there was a good improvement in maximal oxygen update in the 50% of participants who had a low aerobic fitness rating at the start of the study”.

Risk of lymphoedema does not increase with participation in Football Fitness

Around one in three women treated for breast cancer experiences chronic swelling in the arm on the side where the breast has been removed, which is known as lymphoedema.

Previously, professionals advised their patients to be cautious in exerting themselves physically, because it was suspected that this increased the risk of developing lymphoedema. Many studies have now shown that this fear is unfounded, but there is only limited data insofar as this concerns participation in team sport, where physical contact between players is an expected part of the activity.

The researchers in Football Fitness ABC therefore measured whether the women who took part in the football training developed lymphoedema more often, or were more likely to experience worsening of an existing lymphoedema, compared to the women in the control group.

Results from the study have now shown that there was no difference between the groups, and thus no reason to believe that Football Fitness increases the risk of lymphoedema, and this result was recently published in the Nordic cancer journal Acta Oncologica.

Overall, the study shows that Football Fitness is an intense form of training for women treated for breast cancer, and Football Fitness appears to be able to counteract established long-term consequences of breast cancer treatment, such as loss of bone mass and lack of physical energy in everyday activities. These benefits are achieved without an increased risk of developing lymphoedema.

Peter Krustrup and Jacob Uth see potential in extending this form of training as a nationwide offering run by local football clubs under the Danish Football Association (DBU), ideally in partnership with hospitals and local health centers, in the same way as FC Prostate. At the same time, they stress that this is the first study in this area, and there remains a need for larger studies in order to be able to generalize the results to women treated for breast cancer generally, including women older than those participating in this study.

This document is subject to copyright. Apart from any fair dealing for the purpose of private study or research, no
part may be reproduced without the written permission. The content is provided for information purposes only.

Thu Apr 29 , 2021
NEW PROVIDENCE, NJ – Providence Health and Fitness in New Providence is offering a six-week summer body shred to begin May 10 through June 20. This inclusive package includes a complete nutritional program with fitness classes. You will receive recipes, menus, meal plans, and a shopping list in addition to the […] 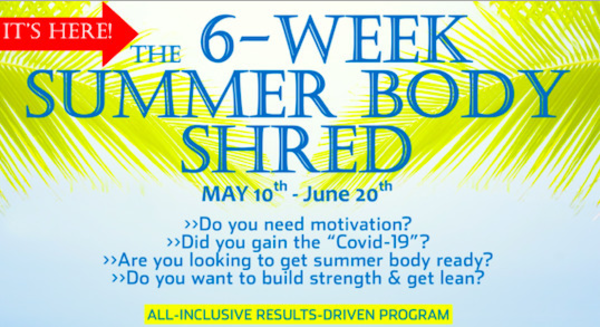